The new year opens with shots of 202 on the 1325 Heuston - Limerick with Mk2d's, plus a few photos of Portarlington station showing the ongoing upgrade works which are in their final stages. The line speed through Portarlington was raised to 50 mph, from 25 mph in the week leading up to Christmas.

Wednesday had an interesting line up in Connolly Yard when C3K 3003 stabled in the yard on Tuesday night after failing earlier in the day covering for a failed DD set. It returned to Belfast at lunchtime. Finally the 22000's operated their first evening peak diagram with a well loaded 1705 Connolly - Sligo.

Friday, Saturday and Sunday comprise some shots from various places, mostly of the Intercity DMU now in service on Limerick services.

The 2nd week of 2008 opens with a few more shots of the Intercity DMU's with 22004 + 22003 captured on their 2nd working in passenger traffic arriving at Connolly.

I spent Friday Lunchtime standing on "The Box" at Islandbridge Jct to observe the comings and goings in Heuston, which produced the unusual sighting of a 3 Pce Hauled Push / Pull to Limerick.

Sunday morning wasn't to bad weather wise so I headed out to Cherryville Jct to catch the 1210 North Wall - Waterford Timber which was hauled by 075. Other 071 sightings included 071 on the 1130 Galway - Heuston. 201 class locos were also photographed at Cherryville and Portarlington along with the 22000's.

The round up of pictures from the 3rd week includes:

072 on passenger duties, then finding its self on more mundane EMU transfer work te following day.

A saturday afternoon near Portarlington waiting on 085 to appear with a crippled Mk2 coach, also seen were 2 Mk3 P/P sets and 2606 + 2615 on the Manulla Jct - Connolly DMU transfer. 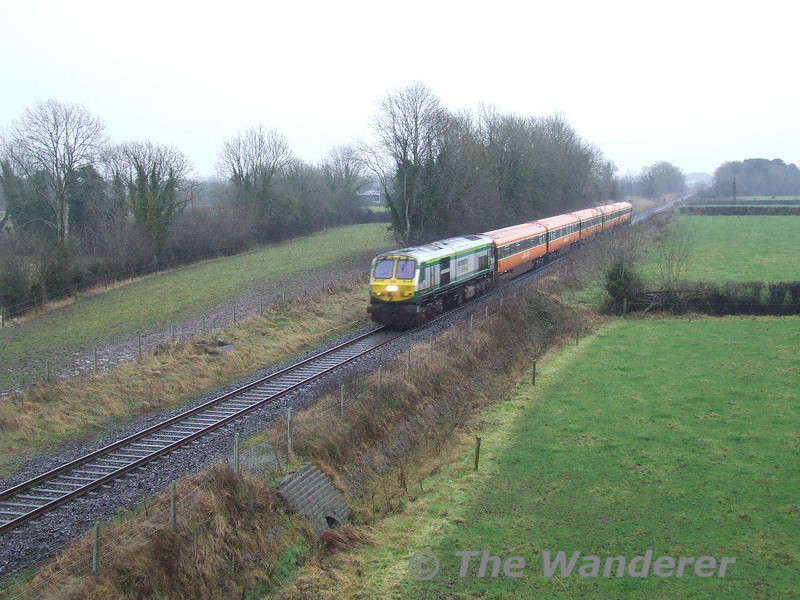