Monday 6th May 2013:
I took a spin to Mallow and Limerick today, primarily to see operations at Mallow while the line to Cork is closed.

Saturday 11th May 2013:
Please click on http://smu.gs/10JklGo for pictures of the IRRS Golden Vale Railtour.

Wednesday 15th May 2013:
073 bring the Weedspray train from North Wall to M3 Parkway, bringing some welcome relief to the staple diet of 22000 and 29000 Classes. Also included is a photo of repainted 077 crossing Gormanston Viaduct with the 1225 Tara Mines - Alexandra Road. Thanks to GM233 for the use of Wednesday's photos.

Thursday 16th May 2013:
Pictures from Thursday include 073 working the Weedspray Train to Portlaoise, 22023 at Portarlington and Heuston, along with 22001. Finally a long overdue trip to former haunts on the LUAS Green Line.

Friday 17th May 2013:
A nice sunny evening tempted me out for 60 mins around the Portarlington area.

Saturday 18th May 2013:
Pictures from today are a tale of two coaches. In July 2009 International Carriages 6203 and 6205 were transported from North Wall to the Killashee House Hotel in Naas, Co. Kildare for conversion into a restaurant. See http://smu.gs/YQPs6w for pictures of the movement in the Dublin area.

In March of the following year I visited Killashee House Hotel and managed to obtain photograph of the coaches stored in a yard behind the hotel. Click on http://smu.gs/168MGOq for the start of the March 2010 pictures. The yard was also home to Cravens Carriage 1558.

It was always in the back of my mind to get back to the Killashee House Hotel to see what happened to the coaches but for one reason or another I never got around to it. Then, only days apart in late April 2013 my interest in these now unique carriages was rasied once again when I saw two seperate pictures on facebook of the carriages. Their individual condition now poles apart.

In the three years since I last visited the Killashee House Hotel time has not been kind to 6205. The future plans for it never materialised and the coach has been left to rot away in open storage. All external windows on the coach have been smashed and the body work is in poor condition. Meanwhile its sister 6203 has been moved to Caragh Nurseries, about 10km away and converted into a Coffee Shop. Compared to 6205, 6203 bodywork appears to be in good condition and the interior of the vehicle is well presented.

Sunday 19th May 2013:
Pictures from Portarlington, Heuston and Busaras while on a trip to Dublin.

Tuesday 21st May 2013:
MKIV DVT 4005 was declared a failure prior to the departure of the 1820 Cork - Heuston on Monday 20.05.13. The set required haulage back to Inchicore and this was arranged for the Tuesday morning as a 0715 Cork - Inchicore Ety and it was pictured at Rosskelton. 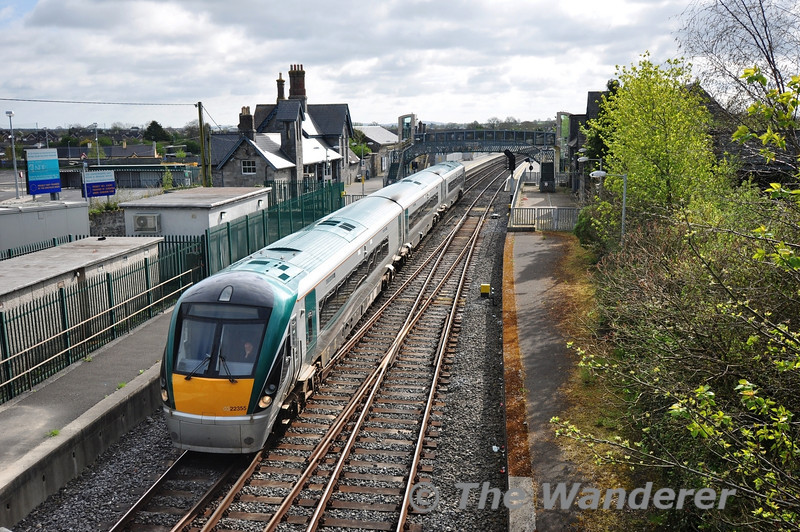