Sunday 1st September 2013:
The first pictures from September are from a visit to Croke Park for the Dublin -v-Kerry Game.

Tuesday 3rd September 2013:
An afternoon visit to Dubin with pictures from Heuston and Connolly, plus Portarlington.

Wednesday 4th September 2013:
Mr. Church was in Skerries to photograph EMU 8127 which was dumped in Skerries after problems en-route from Drogheda.

Saturday 7th September 2013:
Pictures from the Irish Railway Record Society outing to Portrush & Derry may be found at: http://smu.gs/16gOBm2

Sunday 8th September 2013:
After travelling to Derry on the Saturday with the I.R.R.S. I stayed in the West Dublin area on the Saturday night which allowed me to visit "The Gullet" outside Heuston Station on the Sunday morning for the G.A.A. Specials from Cork, Limerick, Ennis, Waterford and Galway.

Sunday 15th September 2013:
Some Sunday morning photos from Heuston and Jervis. The main photos of the day are from the Flightfest Event and these can be found at: http://smu.gs/1dypmeh

Sunday 22nd September 2013:
It's the 3rd weekend in September, which can only mean one thing. It's the G.A.A. All Ireland Football Final in Dublin's Croke Park. Today, Dublin take on Mayo for the Sam Maguire Cup. Iarnrod Eireann operated Four Specials from Co. Mayo (2 ex Westport, 1 ex Ballina & 1 ex Claremorris) to Dublin to take supporters to the final.
Sunday evening has a couple of pictures from a sunny Carn.

Wednesday 25th September 2013:
Pictures from Portarlington and Portlaoise. Includes Autoballaster 9352015 with the new IE Logo and passengers travelling from the National Ploughing Championships.

Friday 27th September 2013:
Friday evening pictures from Portlaoise, Heuston & Sallins. I was lucky at Sallins to catch the R.T.E. Big Music Train (22046) going from Laois Train Care Depot to Inchicore for internal fitting out over the weekend by R.T.E. before its grand tour of the country next week.

The unit has spent the last week at Laois Train Care in preparation for its grand tour next week. The unit has been heavily modified inside with the removal of 56 seats and luggage racks across all three vehicles.

Saturday 28th September 2013:
The All Ireland Hurling Final Replay between Cork and Clare took place in Dublin's Croke Park on Saturday 28th September. In additional to the regular scheduled services ,Iarnrod Eireann operated two specials from Cork at 0905 (MKIV) and 1000 (6 + 3 ICR). One Special operated from Ennis to Heuston (6ICR) at 1040hrs. Like previous occasions the Clare G.A.A. chartered a train from Limerick to Heuston, departing at 1200hrs and 22020 operated this service. Finally the 1045 and 1145 Limerick - Limerick Jct. service were both extended to Dublin Heuston. The 1145 service was operated by a 4 car 2800 Class.

Photographs from the morning are at Kilbridge Bridge, Monastervin and Portlaoise Stations. 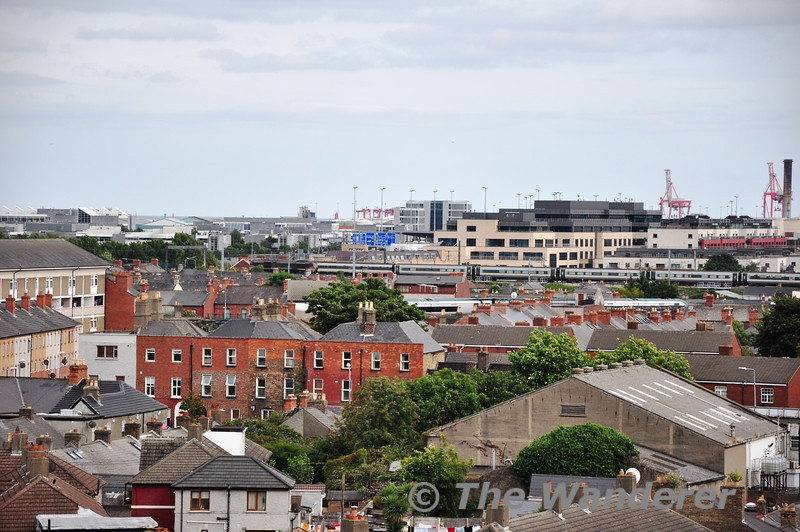 The view from Croke Park sees 207 departing Connolly with the 1600 Enterprise service to Belfast Central. Sun 01.09.13