Tuesday 2nd September 2014:
September 2014 opens with the Limerick - Inchicore Wagon transfer which unusually operated on a Tuesday today, instead of the more normal Thursday.

Thursday 4th September 2014:
Lunchtime today I popped over to Rosskelton to photograph the RPSI's 461 operating Light Engine from Connolly to Limerick.
This was to place 461 in Limerick for the Grandmother Giant opening event on Friday morning.
In the evening time I travelled down to Limerick Jct. & Thurles to see the Limerick Chamber of Commerce Private Charter.

For pictures of the Grandmother Giant's arrival into Limerick by train click http://smu.gs/1qlLAZx

Monday 8th September 2014:
A lunchtime visit to Clonard, near Trumera to see the 1300 Heuston - Cork which was a MKIV set today.

Wednesday 10th September 2014:
Some images from around Portarlington.

Wednesday 17th September 2014:
Three photos from Heuston while passing through today, including ex works 215 as the Heuston Standby.

Thursday 18th September 2014:
215 finally got the chance to stretch its legs on a passenger service when it was allocated to the 0700 Heuston - Cork.

Sunday 21st September 2014:
A few pictures from Kildare while on the way home from Dublin after the All-Ireland Final.

Monday 22nd September 2014:
Just two pictures from a day which should have promised a bit more if the plan had worked out.
First off is 2817 + 2818 on a 1300 Limerick - Inchicore Ety. Stock transfer and a picture of the Kerry Team Captains at Heuston Station with the Sam Maguire Cup.

Tuesday 23rd September 2014:
Some early morning pictures from Portarlington for the Ploughing Championships.

Monday 29th September:
Some pictures from Dublin including the IWT Liner to Ballina /DART to Greystones at Killiney and the Timber train arriving at Waterford.
Click http://www.thewandererphotos.com/RailtoursPreservedRailways/2014/Railtours-Ireland-The-Emerald to see the pictures from day one of the Emerald Isle Express.

Tuesday 30th September 2014:
The last day of September has photos from around Limerick Jct., Ballycoskerry and Stagmount. For day two of the Emerald Isle Express click http://www.thewandererphotos.com/RailtoursPreservedRailways/2014/Railtours-Ireland-The-Emerald
Read More 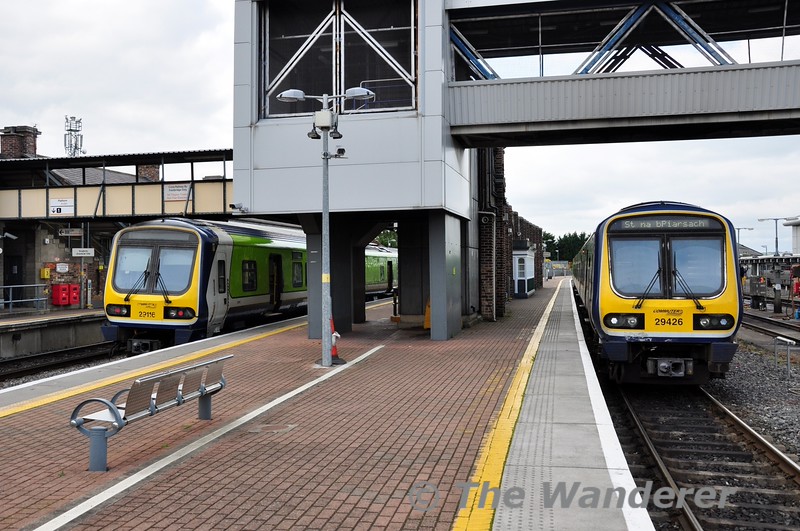