Wednesday 1st June 2016:
As part of the strategy to increase the length of freigh trains, Iarnrod Eireann operated a 18 wagon Timber Train from Waterford to Limerick on Wednesday 1st June hauled by 215. Currently the maximum length of Timber trains is 12 wagons.

Friday 3rd June 2016:
The 1220 Cork - Heuston failed in Cork prior to departure this afternoon. The fault was first suspected to be locomotive related (232), but after a change of locomotive with the standby at Cork (231) the fault didn't clear and GC 4007 was were the defect was located.
The MKIV set required hauling to Inchicore for repairs and departed Cork at 1530 being hauled by 231.

Saturday 4th June 2016:
Some pictures from around Killarney National Park.

Tuesday 7th June 2016:
A stop off at Carn Bridge while on the way home.

Wednesday 8th June 2016:
A visit to Portarlington and Sallins. Includes standard 4101 in set 4005 in place of a First Class carriage.

Friday 10th June 2016:
077 and 087 are in Portarlington this evening for the top and tailed HOBS train this weekend for the Ballast Cleaning between Sallins and Hazelhatch on Saturday.

Saturday 11th June 2016:
A trip from Portlaoise to Limerick.

Monday 13th June 2016:
A few snaps around the Deerpark Bridges in Portarlington to see the recent embankment work which has been undertaken.

Thursday 16th Junre 2016:
Some photos of the recent track alterations which have been carried out in the Grand Canal Dock area. Also see http://smu.gs/1QarLmC for the RPSI Steam Dreams "Emerald Isle Explorer".

Monday 20th June 2016:
IE are undertaking testing between Monday and Thursday this week on spare MKIV Set 4003. A number of carriages have a new type of brake disc fitted which is being trialled to make sure it meets the required standard. On the first night 219 was used for the trial.

Tuesday 21st June 2016:
Delays through Portlaoise due to a trespasser at Portlaoise and 216 finally runs on the main line with a short trial to Hazelhatch.

Thursday 23rd June 2016:
Just before lunch time I got a tip off that 216 was being scrambled from Inchicore to Kildare to replace 088 which was having trouble on the 1130 Waterford - Westport Timber. A last minute trip to Kildare ensured to see 216 arrive and be shunted onto the timber train. It left 30 minutes late at 1445 for Portarlington and onwards to Westport.

Friday 24th June 2016:
A visit to Cherryville Jct. in the evening time while en route to Newbridge.

Monday 27th June 2016:
The project to extend freight train lengths continued on Monday 27th June when a 27 bogie (54 TEU's) liner wagon trial operated from North Wall to Ballina. I photographed the train at Stacumny Bridge near Hazelhatch and at Monasterevin Station. The train was split at Claremorris with 9 bogies being stabled overnight.

Also check out http://smu.gs/29c1p3r for picturs of a LUAS test from Abbey Street to The Point following the recent closure for LUAS Cross City construction works.
Read More 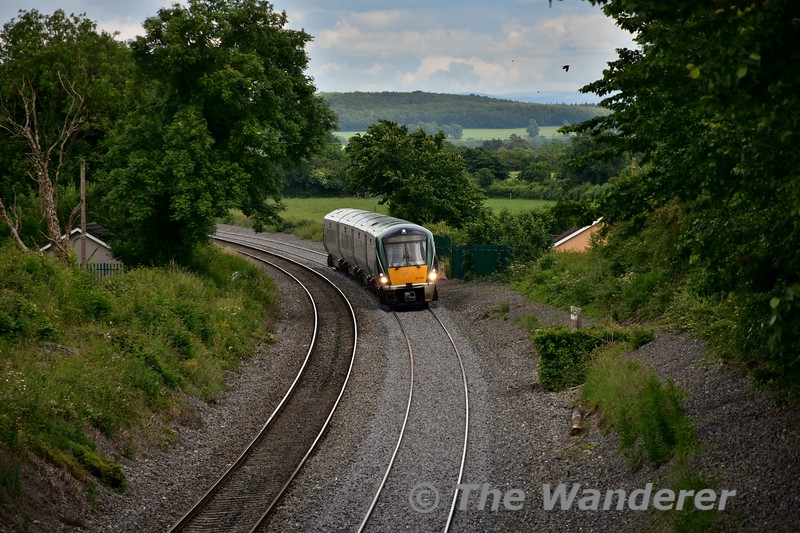