Bank Holiday Monday 1st May 2017:
I tried a new location today when I visited the Canal Bridge in Limerick. This carries the Limerick to Athenry railway over the disused Park Canal. The final photo from the evening is a shot from Knockenpierce, outside Nenagh of the evening passenger to Ballybrophy.

Tuesday 2nd May 2017:
A ramble around the network today with a guest from the UK. Photos come from:
- Thurles.
- Ossory Road.
- Busaras
- The Point
- East Wall Road (Retrotrain 071 on the Tara Mines).
- Heuston
- Hazelhatch
- Sallins
- Mallow

Plans to go down the Cobh line had to be abandoned due to a signal failure at Myrtlehill Level Crossing outside Cork at 1600.

Friday 5th - Sunday 7th May 2017:
I travelled to London for the weekend to take part in the London Underground D Stock Farewell tour on the Sunday. See http://smu.gs/2pv3Cjk for all the pictures.

Tuesday 9th May:
Images from Portlaoise and Limerick.

Friday 12th May 2017:
Two shots from Limerick Jct. while I was heading to Killarney.

Sunday 14th May 2017:
I ventured over to Cush in Co. Kildare this morning to photograph 078 hauling the Belmond Grand Hibernian from Connolly to Waterford. The Sunday and Monday trips to/from Waterford are now scheduled to be hauled by an 071 Class locomotive rather than the dedicated Belmond liveried locomotive.
This mornings outing also has images from the Barrow Bridge at Monastervin and Rosskelton in Co. Laois.

Tuesday 16th May 2017:
Pictures from Portlaoise, Ballybrophy and Limerick.

Wednesday 17th May 2017:
The 0630 Limerick - Ballybrophy service was delayed for 60 minutes between Quakers Road Level Crossing and Borris-in-Ossory due to a number of catttle on the line. The train encountered them at about the 4 1/4 milepost and eventually got going again at the 3 milepost.

Thursday 18th May 2017:
Images from Ballybrophy, Portlaoise area and Kildare.

Friday 19th May 2017:
Been doing a bit of a ramble today. Some of it with the Branch Line Society who are over from the UK and some of it by myself to get some more "juicy" items.
Photos from:
-Thurles.
- Mallow.
- Killarney (to see a MKIV set).
- Stagmount (to see a MKIV set).
- Rathmore.
- Limerick Jct. (to see the Waterford to Limerick Weedspray train)
- Heuston.
- Busaras.
- Connolly.
- Portadown.
- Kildare.
- Cherryville Jct. in the early hours of Saturday morning wathing Ballast Cleaner 781 entering a possession.

Monday 22nd May 2017:
A productive lunchtime at Shanderry outside Portarlington with 077 on the Weedspray from Athenry to Heuston and 072 on the Ballina - North Wall IWT Liner.

Tuesday 23rd May 2017:
Limerick Station will be closing for three weeks from Monday 5th June for the resignalling of the station to take place. The Station and Check Cabins will both be closed with control transferred to the new "Limerick Electronic Control Point". The Station Cabin will be demolished and the kink in Platform 3 will be removed during the closure. On this day I made a few detailed photos of the station layout prior to closure.

Thursday 25th May 2017:
The start of a few days in Northern Ireland and a trip by train from Nenagh to Belfast with pictures from:
- Nenagh
- Ballybrophy
- Heuston.
- Connolly.
- Belfast Central.

Friday 26th May 2017:
Friday lunchtime was spent walking around Belfast City, also includes some photos from the Dargan Bridge.
In the afternoon I went to Bangor and stumbled upon a model railway show (to be featured in a separate gallery) and a miniature railway called the Pickie Puffer.

Sunday 28th May 2017:
A morning jaunt to the Dargan Bridge to see the RPSI Gatwick carriage transfer which turned out to be cancelled.
After getting the 1305 Belfast Central - Dublin Connolly, I travelled out to Howth on the 3rd and final RPSI "Howth 170th Special" of the day. These were operated to celebrate the 170th anniversary of the railway arriving at the current station on the 30th May 1847.

Tuesday 30th May 2017:
The Belmond Grand Hibernian was delayed for just over 60 minutes at Sallins while a reported fault on the train was checked out. It turned out to be lucky for me as it was running a few minutes ahead of the 1525 Heuston - Limerick which I would be catching to Limerick.
Also platform 3 and 4 are now closed at Limerick for remoddelling.
Read More 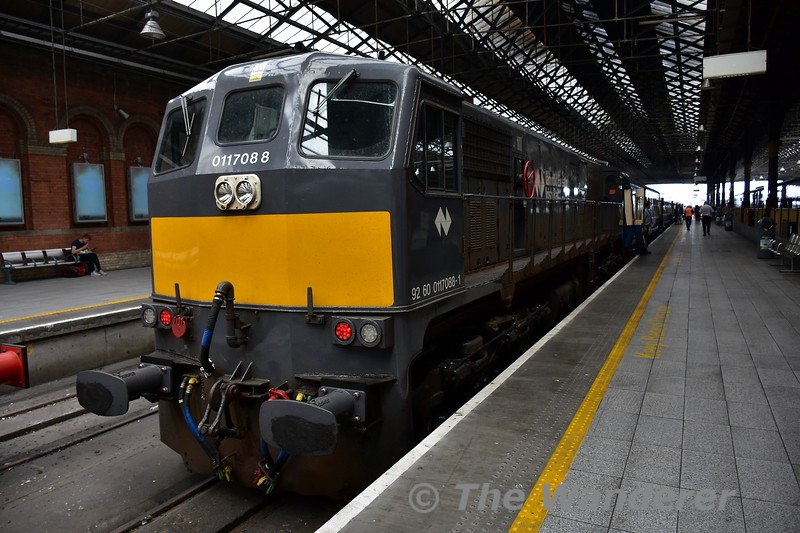 088 stands at Connolly with the RPSI Cravens set. The loco was bringing the Cravens in from Howth. Sun 28.05.17