Saturday 5th October 2019:
After spending three weeks in the USA and Canada its back to Ireland. Here we see 4003 arriving into Heuston with the deferred 1145 from Cork.

Thursday 9th October 2019:
Highlights from today include 225 + 078 working a trial in multiple from Inchicore to Mallow, following on from the trial last week as 225 edges closer to a return to service after 9 years out of service. Later in the afternoon Track Recording Car 700 passed Portlaoise with a 1115 Limerick - Kildare recording run.

Thursday 10th October 2019:
A varied selection of images from today including:
- 2611 + 2612 making an rare appearance at Laois Traincare Depot on a driver training special.
- Common user liveried 233 on the 1225 Cork - Heuston.
- 3ICR 22007 has been fitted with a ZF transmission as a trial and made its first run today from Laois Depot to Mallow under test.

Friday 11th October 2019:
I had to go to Galway today, so I decided to drive to Athlone and let the train take the strain for the rest of the way. Pictures come from Athlone and Galway and also shows the track layout changes which are happening in the yard. While on the way back to Athlone I copped 073 at Ballinasloe on a HOBS train so decided to head home via the scenic route to get a picture of it.
Bonus: Check out Railways of Bord na Mona gallery for photos of six peat trains heading out to the bogs for loading this evening which I got on the way home to Co. Tipperary.

Monday 14th October 2019:
I heading to Dublin this morning so the first batch of images from the day come from Heuston. My planned day in Dublin finished earlier than expected so I hopped on the 1100 Heuston - Cork as far as Limerick Jct. to view the new roof being installed on the footbridge. Then it was into Limerick for some lunch before I decided to catch the 1420 to Galway as far as Sixmilebridge. Despite passing through the station many times I've never alighted from a train there. Sadly the weather was awful so any plans I had to walk into the town had to be abandoned. After Sixmilebridge I made my way back to Thurles via Limerick and Limerick Jct.

Tuesday 15th October 2019:
The Belmond Grand Hibernian was sent to Sligo on a trial today with 078 providing the traction. It is reported that this is to have Sligo available as an option for the 2021 season. I managed to photograph the return working at Lough Owel outside Mullingar and the Hill of Down.

Monday 21st October 2019:
A selection of images from Inchicore. 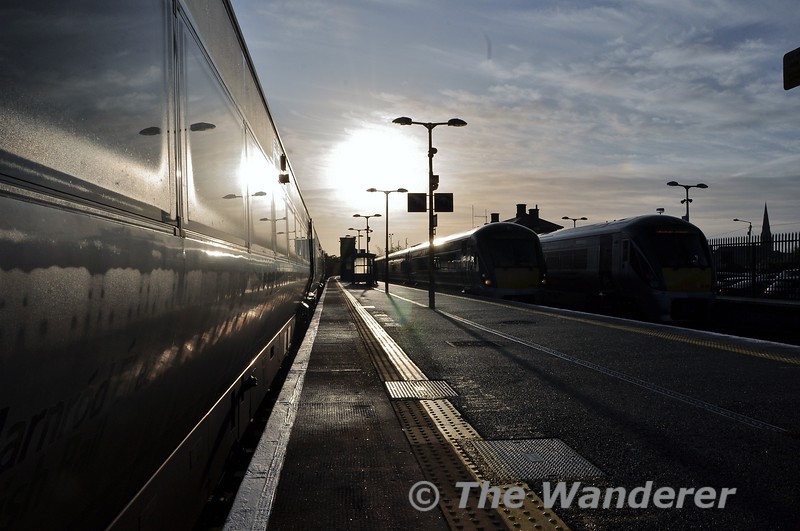