This gallery containes a selection of photos from the past 12 months on the railways of Ireland.

A run down of what each month contains is listed below:

01.04: Late Running Timber at Portarlington due to the failure of 076.
02.04: 075 rescuing failed 076 at Kildare.
11.04: Tamper 740 on a long trip.
16.04: User Worked Level Crossing Misuse at XT150 on the Tralee Line, Tralee and Dingle in disrepair and 22005 at Ballybrack, near Killarney.
18.04: 22007 Ballyhaunis - Laois Train Care after it failed the previous day.
19.04: 077 working a single Ballast Plough Van from Limerick Works to Portarlington.
22.04: The last of the stored MKIII Vehicles were transferred from Heuston to North Wall to make room for new Class 22000 DMU Deliveries, plus a Ballast Train from Gorey to Portarlington.
26.04: The Weedspray season had started at the train visited the East Cork branches.

07.05: The Irish Girl Guides celebrated their 100th Anniversary in May and an event was held in Semple Staduim, Thurles to mark the occasion. Special Trains operated from Dublin Heuston and Limerick, stabling between the event at Laois Train Care. Sadly, proposals for Specials from Cork and Tralee did not materialise.
08.05 The first Sunday in May sees the Waterford and Lismore Diocese Pilgrimage to Knock. A Special train operates from Waterford to Claremorris via Clonmel and Portarlington. Back in the days of loco haulage this train often loaded to 9 MKIII vehicles. Sadly, in the DMU Railway and a lack of Grandfather Rights the maximum train length allowed for a Class 22000 DMU on the Limerick Jct - Waterford line is 3 vehicles. On this day the return working was photographed at Portarlington with fleet pioneer 22001.
14.05: The IRRS operated an 80 Class Farewell Tour visiting Lisburn, Larne Habour, Bangor, Great Victoria Street and Belfast Central. The MRSI would operate another farewell tour later in the year.
15.05: After the IRRS tour it was on a plane from Belfast to London for the London Underground's First and Last 67 Stock Tour. The tour started at Seven Sisters and visited Northumberland Depot. At Finsbury Park we left the Victoria Line for a ramble over the Piccadilly and District Lines to Uxbridge and Ealing Broadway. Due to pathing issues the run to Barons Court siding was sadly omitted.
28.05: The end of May 2011, saw the first of the additional 57 vehicle Class 22000 order deliveried from Rotem in South Korea. The MV Carmen docked at Dublin Port in the early hours and unloading commenced during mid-morning. The new, yet to be commissioned Container Terminal Siding for IWT Trains was also photographed.
31.05: The new Autoballaster wagons were beginning to make an impact and the first rake of withdrawn wagons were photographed being shunted at Portlaoise.

04.05: The damage vehicles from unit 22037 returned from Glasgow in the early hours of the morning and were photographed at Heuston Guinness Yard awaiting unloading.
07.06: 234 made a rare visit to Freight workings and was photographed at Cherryville Jct with the 1655 Ballina - Waterford Timber.
08.06: 071 at Shanderry with 1655 Ballina - Waterford Timber.
09.06: The IRRS ran a Special Tram from Red Cow Depot to Saggart to preview the new extension.
10.06: The Limerick - Inchicore wagon transfer had a double headed 071, alas 073 was failed and 072 was doing all the work. Later in the day 229 hauled failed Tamper 738 from Limerick Jct to Kildare for repair. The final picture from this day features 076 crossing the Barrow Viaduct with the Waterford Timber.
11.06: The Belview - Waterford Steel Train at Cherryville Junction.
13.06: Irish Distillers, makers of famous whiskey brands such as Jameson, Paddys and Powers operated a number of Private Charters between Cork - Dublin - Cork throughout the year, The first one was an evening special from Cork and was operated by a MKIV set.
18.06: A personal favourite of mine from Whitebridge in Killarney with 22023 passing at Speed. After that I went to Loo Bridge on the former Kenmare Branch to see the restored Station Building.
19.06: Happy Passengers awaiting the train to Dublin at Killarney.
22.06: 083 departing Clara with the Ballina - Waterford Timber.
28.06: 083 crosses the Barrow Bridge at Monastervin with the 1655 Westport - Waterford Timber.
29.06: 081 is pictured at Meelaghans Level Crossing with the 1655 Ballina - Waterford Timber.

01.07: After a lull of several months the De-Dietrich MKIII Van project started to make progress again. 220 brought 89605 (former 7605) from Inchicore to Limerick Jct to turn the van on the triangle.
02.07: 230 had the unusual job of bringing the spare De-Dietrich Set from Belfast York Road to Inchicore on Saturday 2nd July for the MKIII Van Project. Later in the day the LUAS Saggart Extension was opened.
07.07: The first of the 2011 Delivery of Class 22000's made their first trial with a short trial run from Heuston to Portarlington and back to Heuston. Also, 074 worked a Claremorris - Waterford Laden Timber.
08.07: 209 worked the IWT Ballina - North Wall Liner.
12.07: 209 was working Cork - Dublin passenger trains, while 079 worked the Westport - Waterford Timber to Kildare where it was replaced by 220.
16.07: MKIII EGV + De-Dietrich tests from Inchicore to Drogheda and 9003 at Dromin Junction.
19.07: New Ballast Cleaner leaving Kildare on trial to Carrick-on-Shannon.
22.07: 2701 + 2702 at Nicholastown between Clonmel and Cahir with the 1640 Waterford - Limerick Jct Regional Service.
23.07: The Railway Preservation Society of Ireland operated their first Dublin train of the 2011 season with a Diesel hauled tour from Dublin Connolly to Kilkenny.
26.07: On Sunday 24th July Vehicle 9402 was removed in Connolly due to a defect. To get it back to York Road it was inserted back into the formation of the 2050 Connolly - Belfast on the Tuesday evening.

01:10: The RPSI ran a 2nd of their Mystery Train Railtours on Saturday 1st October. This time the destination was Limerick and traction for the outward trip from Connolly was provided by 072. 080 worked the return leg and failed at Islanbridge Jct.
21:10: New 4000 Class DMU's on Northern Ireland Railways.
28.10: President Mary Mc'Aleese visits Heuston Station for the State Coaches Exhibition.
29.10: Due to weekend engineering works at Ossory Road Jct all Western Commuter and Sligo Intercity services used the MGWR line to access Connolly Station.
30.10: Awbeg River Bridge renewal near Buttervant.
31.10: Up and Down IWT Liners unusually operated on a Bank Holiday with 209 and 215.

04.11: Due to a flood Damaged Bridge at Lansdowne Road on the Dublin - Rosslare Line, the DMU sets south of the blockage had to be swapped out using the mothballed South Wexford Line. On the 4th, the ICR set was swapped with a fresh set and the following day, the 5th November, the 8 x 29000's were swapped out.
05.11: 22007 still managed to retain its "Cue Ball" throughout 2011. How long into 2012 will it last? It was pictured passing Yellow Quarry with the 1130 Mallow - Tralee.
11.11: 209 DFDS Liner at Kildare.
17.11: 666 days later. Laois Traincare Derailement victim 22037 returns to traffic.
21.11: A visit to NIR to photograph the 450 Class and the 80 Class Sandite.
22.11: After an absence of about 10 years, an advertising livery has returned to the DART. Units 8529 + 8530 & 8531 + 8532 have been reliveried into a Emirates Airlines livery to promote that airlines new service to Dubai and beyond from Dublin.
24.11: A new addition to the Irish Railway Scene is this Sperry Ultrasonic Container mounted on a container flat wagon. It will be touring the IE network over the next number of weeks. On Thursday 24th November 073 hauled the wagon from Limerick Wagon Works to Connolly and it is pictured passing Portlaoise.
27.11: Emergency Training Exercise at Docklands Station and more Emirates DART pictures.

10.12: Northern Ireland Railways 209 is still gaining useful employment on Iarnrod Eireann Permanent Way Trains. It is pictured passing Portarlington with two flat wagons and four spoil wagons working 0900 Portlaoise - Heuston Guinness Yard.
17.12: The RPSI Santa Trains were Diesel Hauled this season due to no steam loco available. On the last weekend, 215 made a welcome sight on the trains compared to the more usual 071 Class loco.
31.12: The 2700 Class DMU in their Twilight Months on Limerick Regional Services.

A Happy New Year to everybody.
The Wanderer.
Read More 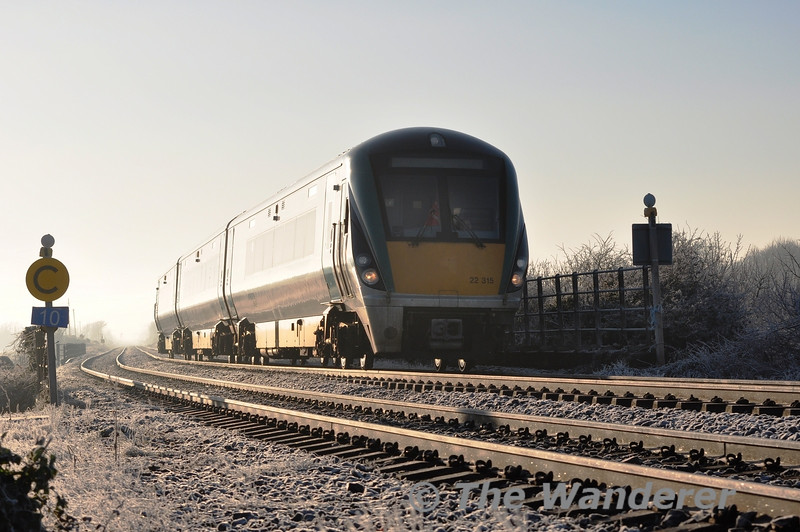 22015 operated from Docklands to Drogheda DMU Depot to test equipment for the forthcoming introduction of the 22000 fleet to Drogheda. The ICR is pictured at Laytown on its way north. Thurs 20.01.11