This gallery containes a selection of photos from the past 12 months on the railways of Ireland.

A run down of what each month contains is listed below:

January 2012:
09.01: ICR sets 22047 + 22050 on the 1555 Trial Heuston - Cork at Straboe.
11.01: The 0615 Heuston - Portlaoise & 0743 Portlaoise - Heuston were unusually operated by a MKIV set instead of the booked 2 x 3 ICR sets on Wednesday 12th January 2012.
12.01: Damaged ICR 22033 was hauled by 076 from Laois Train Care to Inchicore for repairs.
13.01: 082 at Portlaoise with the Sperry Wagin undergoing testing.
24.01: Following work to lower the track under bridges on the GSWR line between Islandbridge Jct and Glasnevin Jct in Dublin clearance was granted for hi cube containers to be carried on standard wagons between North Wall and Kildare. 076 is pictured at Geashill with the IWT Liner with Hi-Cube Containers.

February 2012:
01.02: 080 is captured at Rosskelton bringing a rake of Autoballaster Wagons from Limerick to North Wall.
03.02: Old Style station nameboard at Wateerford, and now stored 2723 + 2726 with the 1140 Waterford - Limerick.
04.02: More 2700's at Limerick plus the first of the new arrivals from Drogheda along with the last remaining cement wagon.
11.02: 2700 Class crossing at Athenry with Western Rail Corridor services.
12.02: A Special operated from Claremorris to Heuston for Mayo G.A.A. Club Davitts.
15.02: The weekly "Wheels transfer" from Inchicore to Limerick produced an interesting assortment of wagons on this day. 073 is pictured passing Rosskelton with 2 LP flats + 2 Per Way flats + 1 laden wheel wagon + 1 empty wheel wagon + 1 Tara Mines wagon.
18.02: The ICR's spread their wings to Northern Commuter services with the closure of Connolly V.P. for servicing and transfer of the work to Drogheda Depot. MRSI operated their 450 class farewell tour.
19.02: Visit to the Ulster Folk and Transport Museum and stored 450 class in Belfast Central.
29.02: On the extra day of the year, 083 transferred two timber wagons from Inchicore to Limerick. The wagons had received wheel turning at the Lathe in Inchicore.

March 2012:
02.03: Changing trains in Athlone with the 1530 Heuston - Galway / Westport going direct to Westport.
04.03: New ICR's 22053 + 22054 went empty to Heuston for entry to service the following day.
05.03: New Limerick - Heuston via Nenagh service is introduced (and only lasts until 18th January 2013) along with the first of the 17 unit batch of new ICR's enters traffic on the Kildare Commuter route.
06.03: Permissive Platform working at Heuston.
10.03: Cobh 150th Special.
13.03: LM307 brings a laden peat train to Coolnamona Works from Clonkeen
14.03: In preparation for the forthcoming RPSI The Spare Link Railtour over the weekend of the 24th and 25th March, a driver training run was conducted on Wednesday 14th March 2012 from Connolly to Howth to pass out two Connolly Based Drivers on the Howth Jct - Howth Line. This was also the first known visit of a 201 class locomotive to Howth. Picture courtesy of Lar Griffin.
19.03: Is it 3km or 5km to Portarlington? Confusing road sign on the R420.
21.03: LUAS Red Line Services were suspended between Heuston - Connolly & The Point after a fire in a building on Benburb Street on Saturday March 17th and pictures of the new footbridge in Kildare.
24 & 25.03: The RPSI ran a farewell special "The Spare Link" for retired driver Dan Renehan from Connolly to M3 Parkway then to Rosslare Europort before stabling in Wexford for the night. 461 didn't behave itself during the day and the special only reached Rosslare Strand, several hours late. Progress on the Sunday was much better with only a small amount of late running by the time Howth was reached. The first steam loco to visit the town in over 30 years.
27.03: 22056 at Portlaoise on a Cork - Heuston trial. Railtours Ireland Model Railway Layout of Killarney on display at Deros Coaches, Killarney.
28.03: Killarney: Ireland's Tidest Town in 2011 is still looking fantastic in the March 2012 Sunshine. This photograph is looking at Kenmare Place.
31.03: IRRS operated a 2700 Farewell Tour from Ballybrophy to Waterford via Nenagh, Limerick and Clonmel.

April 2012:
02.04: The 1200 Heuston - Cork stands at Portlaoise Station after 227 had shut down enroute between Portarlington and Portlaoise and coasted into the station. After fault finding with the CME Department the driver got 227 restarted and the service continued on its journey after a 50 minute delay.
07.04: The old and the new order on the Waterford- Limerick corridor.
08.04: Visit to the mothballed Waterford - Rosslare Strand line.
09.04: Usually the domain of the DART EMU Fleet, the Howth Branch has become rather accustomed to Diesel Locomotives over a four week period in March and April. After 228 and 217 visited the Branch in connection with an RPSI Tour, it was the turn of 076 to visit the Branch on Easter Monday to test new signalling equipment. Picture courtesy of Lar Griffin.
14.04: Exit this way. The 2700 Class DMU's will soon be heading to the exit from the everyday Irish Rail scene as they face imminent replacement by 2800 Class DMU's displaced from Dublin. 2717 + 2718 are pictured at Limerick Jct with the 1250 to Limerick.
17.04: WiFi rolls out across the Iarnrod Eireann Fleet. Vehicle 22302 has its number positioned in a non standard position following repairs to the cab front after an incident on the line.
18.04: Sunny and Stormy at Carn, Laois.
19.04: Thursday Only IWT Liner at Geashill.
21.04: 2800 Class DMU's have been a rare sight on the Dublin - Cork line for the last several years but that has changed with the transfer of the Fleet to Limerick to replace the 2700 Class. 2806 + 2805 are pictured passing Portlaoise Station working the 0810 Limerick - Inchicore Empty Stock. The last remaining rake of Ballast Hoppers were stabled at Mallow. RPSI's 171 for 171 railtour. Unusual Railcars at Cork and Inchicore.
23.04: LM237 hauls a heavy load of milled peat from Clonkeen Bog to Coolnamona Works near Portlaoise.

May 2012:
01.05: The 1500 Heuston - Cork and 1830 Cork - Heuston are temporarily rostered for a 6 car Premier Class 22000 set from Monday to Thursday to release MKIV sets for a Deep Cleaning program in Heuston. E Car Ireland Charging Points at Kildare Tamper 740 hauled to Kildare after failing near Drogheda.
10.05: The long evenings of May, June and July means it is possible to photograph the Laden Timber Train from the West of Ireland to the Waterford in the Midlands.
12.05: RPSI South Clare Railtour featuring the RPSI's 186 and NIR 209.
14.05: The former Barytes Wagons are now stored on a siding off the former line from Portlaoise to Kilkenny.
15.05: The 1700 Heuston - Cork was operated by High Capacity 22045 on Tuesday 15th May 2012. The 1330 Cork - Heuston had failed at Portlaoise due to a locomotive fault and the Standby 22000 unit covered the Cork service. Failed MKIV set hauled to Heuston by 223.
17.05: Against a setting sun the 1655 Ballina - Westport Timber passes Killenard with 073 in charge.
23.05: The Annual Iarnrod Eireann Weedspray campaign continues it jaunt around the network. On Wednesday 23rd May the Weedspray train operated 0836 Ennis - Portlaoise via Limerick and the Nenagh Branch.
24.05: After receiving repairs at Inchicore to fire damage sustained in an engine fire last year at Athenry, unit 22033 was returned to Laois Train Care by 076.
25.05: As part of the revised Nenagh Line timetable introduced on Mondy 5th March 2012 trains are now scheduled to cross at Roscrea Station.
26.05: All change at Killarney. The 0900 Heuston - Cork was delayed for 33 minutes at Thurles due to a Door Fault on vehicle 4120. This meant the 1130 Mallow - Tralee service was also delayed departing Mallow. To ensure the 1315 Tralee - Mallow service operated to time (from Killarney) the 1130 from Mallow was terminated at Killarney with a rail replacement bus service to Tralee.
27.05: 22032 is pictured at Yellow Quarry near Killarney with the 0825 Heuston - Tralee and 207 at Carn with the 1630 Cork - Heuston.
29.05: Nenagh Line 2700 Class DMU's.
30.05: The Iarnrod Eireann 2012 Weedspray season came to an end on Friday 1st June when the train operated from Heuston to Portlaoise to stable. Earlier in the week, on Wednesday 30th May the train is pictured at Clonkeen with 076 now in charge operating from Mallow to Heuston. It was due to spray the Up Fast line between Hazelhatch and Cherry Orchard.

July 2012:
03.07: With the Limerick - Limerick Jct. Line closed for bridge renewal the 1340 Heuston - Limerick was diverted via the Nenagh Branch. Plus some photos of the 2700's in their final weeks.
05.07: 230 produces some clag as it gets to grips with the gradient from North Wall up to North Strand Junction with the 0930 North Wall - Ballina IWT Liner.
15.07: East Kerry landscape as the 0720 Tralee - Heuston threads its way towards Rathmore.
16.07: The RPSI operated a Railtour to Wicklow. Looking and sounding in fine form 461 passes through Tara Street with the 1035 Connolly - Wicklow Special.

November 2012:
02.11: After somehow escaping for nearly 4 years unit 22007 has finally received the standard 5 digit numbering system as used on the rest of the class. It lost its cue-ball "7" during a visit to Laois Train Care Depot on Thursday 1st November 2012. The following day it is seen at Heuston after arriving with the 1315 from Westport with 22054.
03.11: The 0620 Galway - Limerick service was delayed this morning due to a fault with 2811 + 2812. The pair were dumped in Galway and following maintenance attention were attached to the 0940 Galway - Limerick with 2813 + 2814. The pair of units arrive at Athenry before reversal for the Western Corridor Line to Limerick.
The MPV 790 has been very elusive to The Wanderer since delivery a couple of years ago. Today it was employed on Water Jetting duties between Kildare and Charleville. It is pictured at Carn following a few minutes behind the 1400 to Cork.
06 & 07.11: After its Kilkenny Incident the RPSI operated trials of 461, first to Sallins and then two days to Portlaoise. Along with 22010 and 22011 trials to Portarlington.
11.11: Withdrawn members of the 2700 Class at Limerick
15.11: One of the MKIV diagrams appears to have been replaced with a 6ICR Premier Class Set for the last couple of weeks. One of the services affected is the 1300 Heuston - Cork which is pictured at Rosskelton with 22036.
17.11: Visit to the Fenit Branch in North Kerry.
19.11: IWT Liner passes Monastervin several hours late after a double loco failure.
22.11: A weekly trial of wagons has been operating between Limerick and Kildare for the past three weeks. On Thursday 22nd November the 1345 Kildare - Limerick passes Rosskelton with 088 in charge.
29.11: Wagon Transfers between Limerick and Dublin.


A Happy New Year to everybody.
The Wanderer.
Read More 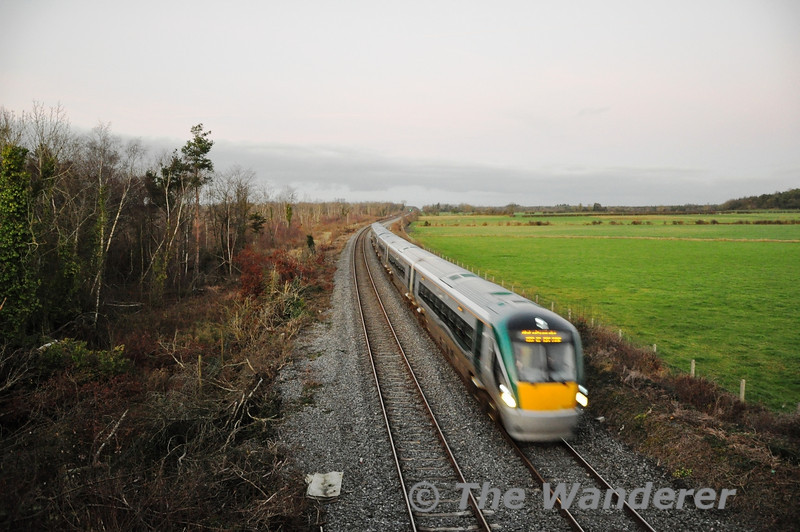