I crossed off an item that has been on my bucket list for several years in mid-April, a cruise on the River Shannon.

My travelling companion picked me up at Nenagh a little before 1300 hours on Wednesday and we made our way to Portumna arriving shortly after 1430. We were warmly greeted by the Emerald Star staff and after filling out some paperwork were shown to our boat. A German couple had arrived before us and seemed to be asking nine million questions to the Emerald Star guy who was inducting them, so we had about 45 minutes sitting around before another staff member (Jason) came out to start our induction. Jason was A1, very easy going, but going through the essential points and recommending places to check out along the route we were to take. I had done a lot of research prior to the trip, such as reading up on the Navigation Charts, Boat Handling etc. and Jason was impressed with my knowledge for a first timer. Part of the induction also includes boat handling on the River and Jason took us out and let us loose so to speak showing us how to turn the boat, reversing and mooring on a jetty. Back to the base, in the middle of a shower we dropped Jason off and topped up the water supply which was showing only half fill.

Departing at 1720 (an hour later than I had planned) we set off towards Banagher our first stop for the night at full speed – 8 mph! This journey wasn’t going to be about going anywhere in a hurry. Time to sit back, relax and enjoy the scenery, and cold. Still a bit chilly in April! But before we got to Banagher we had the first major test of our cruise. Get through Victoria Lock at Meelick. Thankfully all went OK and we were soon on the way again also noting the German couple had decided to moor at the jetty by the lock for the night. We docked at Banagher, shortly before 2000 hours at one of the Carrickcraft Jetties and plugged in the shore supply. Dinner cooked on board and a few drinks we were both tired after a long day and we turned in for the night.

On Thursday we rose about 0900 and had breakfast on board and topped up the water supply fully. After a walk around the Banagher Harbour area, which was the site of the railway station until its closure in 1963, we paid our mooring fee of €15 in the Carrickcraft office and cast off just before 1100. The destination for today was Athlone with stops at Shannonbridge and Clonmacnoise.

I had hoped to see a Bord Na Mona Peat Train on the railway bridge by Shannonbridge Power Station but as we neared I noticed that Engineering Works were taking place. A quick stop for a few photos and we carried on to Shannonbridge Village, taking the last available mooring and managing to moor the boat in a rather tight space for a novice. Off down to explore the village we stopped at Killeens Bar and Grocer for refreshments. Back on board we cast off and headed to Clonmacnoise for a late lunch on board. Once that was eaten we visited the monastic site overlooking the River Shannon in County Offaly. Well worth a visit.

After Clonmacnoise we set off for Athlone which should take about 60 minutes but it took about 90 minutes. Reason, instead of a River we were in what seemed like a lake. The Shannon is still badly flooded from Clonmacnoise to Athlone. Thankfully with the Navigation Markers we weren’t lead astray. Athlone had its own challenges, with the water level still high the current was strong and upon leaving the lock the boat seemed very difficult to control and I struggled to get the boat away from the quayside wall. Crunch. The Port rear fender came a cropper on the lock gate. Oops. The troubles weren’t over yet and mooring at the jetty in Athlone was difficult to say the least. Thanks to a helping hand from the marina attendant we got the boat to where it should be and tied up for the night.

The next day we departed at 1100 and headed to the Hodson Bay Hotel on Lough Ree for a late morning tea and a scone. Heading back towards Athlone we realised that the locks close from 1300 to 1400 for lunch and it would be touch and go if we would make it in time. Unfortunately we didn’t make it in time so full about and we tied up at the public jetty and had lunch ourselves.

Setting off at 1400 we were soon through the lock and in to the flooded area of the River Shannon. The heavens soon opened, so I switched helm control to the main cabin position and retreated below deck. Now trying to navigate a flooded river, with restricted all round vision (interior helm control), lashing rain wasn’t my idea of fun. At once stage I had to come to a full stop and go up on deck to search out the next marker post as I couldn’t see it. Oh and I nearly ran over a trio of Swans as looking through the binoculars searching for the navigation markers the Swans swam into my path. Full reverse and disaster adverted!

Once past Clonmacnoise the Shannon became a river again with only a little flooding in spots. On past Shannonbridge, remembering to turn left and not straight on up the River Suck to Ballinasloe (despite the signs saying River Suck Navigation it would seem a lot of people do it!) and past the power station we were soon heading for our destination of the night, Shannon Harbour.

Shannon Harbour is a bit of a mystery trying to find out information on and is also well hidden if you’re travelling downstream, very easy to miss it if not paying attention. None of the River Shannon guides give any info on the location. From research on Google Maps, moorings seemed to be busy between Locks 36 and 35 on the Grand Canal up towards the Village. But there was a small jetty before lock 36 on the river side, but I wasn’t sure if that was reserved for boats waiting to go through the lock. As a plan B we would head to Banagher if needs be which was 20 minutes away.

We moored at the Jetty and there wasn’t any signs saying reserved for lock mooring. So far so good. A quick walk beyond lock 36 confirmed my fear of no suitable spaces so we decided to stay moored where we were. We continued up to the village and popped into the village pub were we were warmly welcomed by the owner and some locals. The owner of Mc’Intyres agreed with my assertion that Waterways Ireland need to do more to attract river traffic to the village as it seems to be bypassed. The situation isn’t helped by the fact that many boats, many in an unseaworthy condition are taken up berths in the village. Despite many signs saying mooring is limited to a maximum of 5 days this clearly isn’t being enforced by Waterways Ireland.

Back at the boat and having dinner on board, it was a beautiful spring evening. We headed back to Mc’Intyres for a few more drinks and the local pub was buzzing. A really enjoyable evening was had at this hidden gem of the River Shannon. On a side note I did take a picture of Mc’Intyres but a memory card error meant it wasn’t saved which I didn’t realise at the time. A change of memory card as a precaution and no more issues since.

On Saturday we had to have the Consul 2 back at Portumna by 1200 so it was an early rise for a 0915 departure. It was a cold morning so when I awoke, I switched the engine on and put her into a high idea to build some engine temperature and switched on the cabin heater. The heater works off battery power as well as the engine but I figured it would be more effective from the engine. Thankfully we soon warmed up. I then ventured up on deck and nearly went flying. The boat deck was covered in ice! It was COLD last night! I got the brush and brushed the ice off the deck and steps at the stern and made sure all walking areas were safe before we cast off. I didn’t want any of us slipping and falling overboard at a crucial moment.

The weather on the Saturday morning, while a tad chilly was beautiful. Blue skies and a great day for cruising on the Shannon. We didn’t want it to end. After negotiating the difficult “S” bend at the bridge at Banagher we were soon heading to Meelick. The navigation channel at Banagher is obstructed by some of the Carrickcraft Jetties so boats have to make an “S” turn in a space of about 70 metres.

Passage through Victoria Lock at Meelick was swift and all too soon Portumna Bridge came in to view. A turn to Starboard and we entered Connacht Harbour and reversed very neatly between two boats to moor at the quayside.

The boss of Emerald Star in Portumna, Timmy Walsh was on hand to meet us and refuel and water the boat. In the main office we handed back the charts, captains handbook and emergency phone. The journey was over. But it is one that I will be doing again. If you want something different for a short break or even a week away a trip on the Shannon is a must. Check out http://www.emeraldstar.ie for more details.
Read More 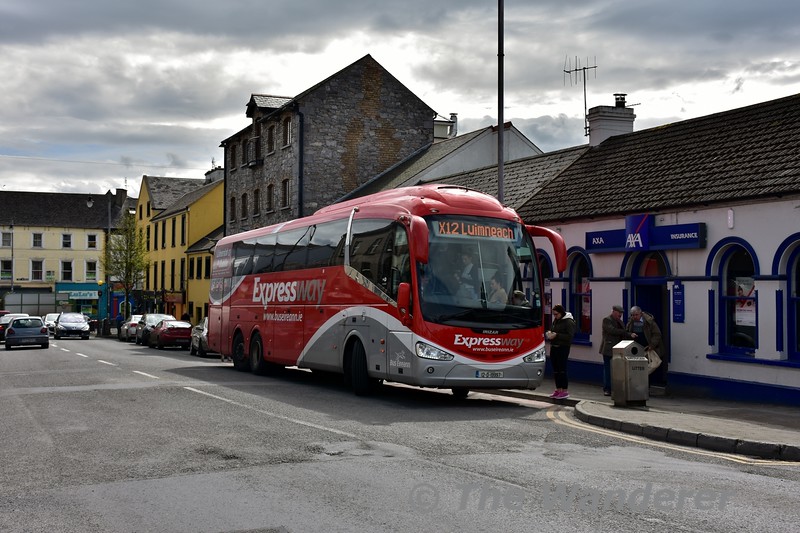