Now in its 46th year, the Annual R.P.S.I. Railway Heritage weekend for 2015 takes in South Munster with visits to Cork and Kerry. The weekend starts on Thursday with a steam hauled positioning run from Whitehead in Co. Antrim to Dublin Connolly. On Friday the now traditional diesel hauled railtour, heads to the Sunny South East towns of Wexford and Rosslare.

At Midleton No. 85 will be replaced by the R.P.S.I.'s other operational Mainline Steam Locomotive, No, 461 also built by Beyer, Peacock & Co. in 1922 for the Dublin & South Eastern Railway for the short hop back to Cork where the trains passengers will spend the next two nights in Ireland's second city.

The following day the tour will head back to East Cork departing at 1030, with No. 85 taking the train to Cobh, famous for the final port of call for the ill fated Titanic 113 years ago. At Cobh, No. 461 will take over for the reminder of the day with a non stop run from Cobh to Mallow including the infamous climb out of Cork through the 1240 metre long tunnel out of the City to Rathpeacon, 4 miles distant. The train will arrive in Mallow at 1225 and depart at 1325 for the 40 miles to Killarney. Calling at Banteer (1345 - 1355), Millstreet (1411 - 1421), Rathmore (1434 - 1446), 461 is due to arrive into Killarney at 1510 hours. The railtour passengers will have 1 hour & 20 minutes to sample the delights of Ireland's No. 1 Tourist destination. At 1630 hours, 461 is scheduled to steam out of Killarney back to Mallow and then into Cork where the tour will spend its second night.

On Monday, the final day of the tour departs Cork at 0940 with No. 85 taking the train all the way back to Whitehead in Co. Antrim. Stopping off at Charleville, Thurles and Portlaoise the train is due to arrive in Dublin Connolly at 1450. After a break of a few hours, No. 85 will depart Connolly at 1908 on the final leg to Whitehead bringing to a close another successful Irish Railway Heritage weekend.

The gallery also features photographs from Hassard Stacpoole & Shane Roberts from locations on the South Munster Railtour that I didn't get to.
Read More 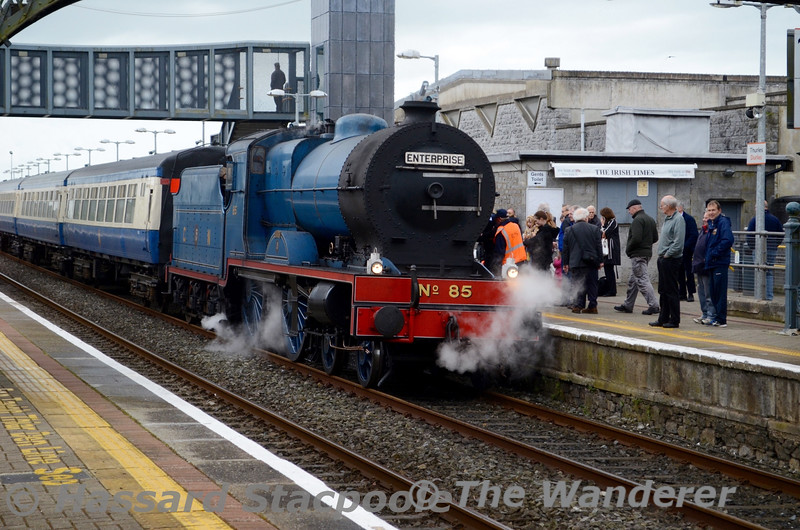