Steam Dreams, a UK based railtour company have teamed up with the Railway Preservation Society of Ireland to offer a 7 day steam hauled trip around Ireland, with an extra two days travelling to/from London.

The tour, the Emerald Isle Explorer started on Wednesday, 17th June, 2015 travelling from London to Dublin by train to Holyhead and then on the ferry arriving into Dublin in the early evening.

Day 2, Thursday, 18th June, was an optional day trip to Belfast to visit The Titanic Exhibition. This turned into a bit of an endurance test! The plan was for the outward leg of the trip to Belfast to be diesel hauled by one of NIR 111 Class locomotives. The empty carriages were to come from Whitehead on the Thursday morning. The loco, 111 shut down twice enroute and on the second shutdown it was declared a failure near Acton Level Crossing, Poyntzpass. The train was rescued by 112 and went back to York Road to stable for the day. The Steam Dreams passengers were put onto the 1100 Dublin Connolly – Belfast Central “Enterprise” which was hauled by ex-works 8208. Unfortunately this failed at Wellington Cutting, south of Newry. The decision was taken to detrain the passengers and the 1235 Belfast Central – Dublin Connolly formed of NIR 3000 Class 3006 + 3005 was brought alongside and the passengers evacuated using emergency ramps. The passengers were brought to Dundalk and transferred to the 1320 Dublin Connolly – Belfast Central formed of 5ICR 22037. The passengers got to Belfast, on the third attempt, about 1hr and 45 minutes behind schedule. The return trip to Dublin was less eventual with departure at 1905 from Belfast Central with No. 85 “Merlin” hauling the RPSI MK2 Set. Arrival into Connolly was 40 minutes late due to a hot box detector being set off south of Drogheda.

Day 3, Friday, 19th June, the tour headed west to Galway behind steam with the RPSI's Southern Coaching stock formed of preserved Craven Coaches. There was a 2 hours break in Athlone before we rejoin the train and continue to the West Coast city of Galway where we will stay for the next two nights. 85 brought the train to Portarlington Up Loop and 461 was used from there to Galway.

Day 5, Sunday, 21st June, the tour travelled from Galway to Killarney via Limerick using 461 to Limerick and 85 from Limerick to Killarney. The hotels in Killarney include the 5* Aghadoe Heights, the Killarney Lane and the Malton.

Day 6, Monday, 22nd June, is a day of leisure in Killarney which also includes a short 45 minute each way steam hauled excursion down the branch line to Tralee on the coast, returning to Killarney in time for dinner.

On Day 7, Tuesday, 23rd June, the passengers said goodbye to Killarney and headed east steam hauled by 85 to Limerick Jct. and 461 to Waterford arriving early afternoon.

On Day 8, Wednesday, 24th June, the tour visited the world-famous Waterford Crystal, before heading off to the station for an 1125 departure to Kilkenny, hauled by 461 where a two hour break was taken. Also at Kilkenny 85, replaced 461 for the final dash northwards across Ireland for an early evening arrival in Dublin and back to our original hotels.

Sadly, on Day 9, Thursday, 25th June, we wave goodbye to the Emerald Isle before sailing or flying back to the UK with the same onward arrangements as Day 1 in reverse.
Read More 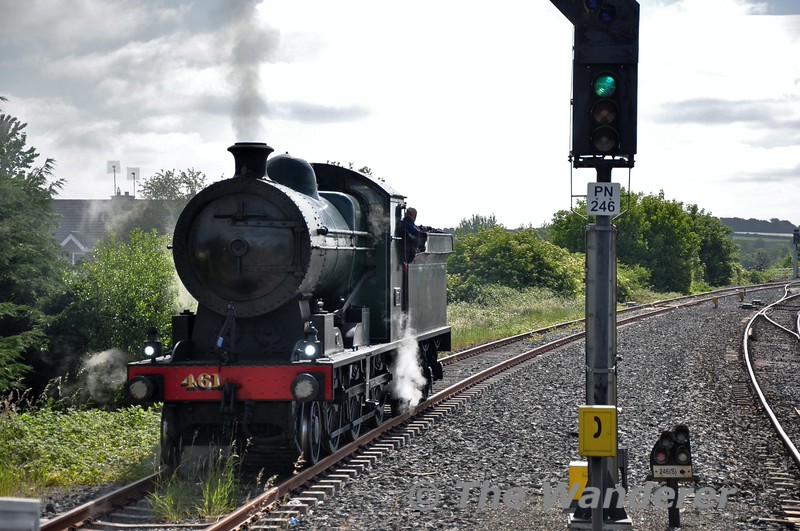